On Sunday 16th June meadows will be open around Trellech.  Visits can be made between 11am and 4pm. Directions for each site are given below the map.  For meadows open on 9th June click here.

New Grove Farm is owned by Peter and Pam Lloyd. Their fields and land by the entrance drive is beautiful species-rich grassland. Their field lies adjacent to the Gwent Wildlife Trust reserve that is made up of four adjacent meadows.

The Lloyds’ fields and the northern two fields of the GWT reserve are amongst the very best wildflower meadows in Britain – their grassland flora is indicative of an unbroken history of traditional management. In contrast, the southern two fields have been reseeded and fertilised in the past but the Trust is now working to restore their past glory. In June there is an amazing profusion of Common Spotted-orchids. Twayblade, Adder’s-tongue fern and Moonwort have also been recorded here.

From Monmouth, leave south on the B4293, signposted Trellech and Mitchel Troy. Approximately 1 mile from Monmouth, take the left fork, signposted Trellech , Penallt and Chepstow. Continue along the B4293 up the hill and past the turning to Whitebrook and The Narth on the left. Soon on your right you will see a wind turbine in a small field; turn right soon after this into a tree-lined drive to the house. You can walk from the Lloyds’ land into the GWT Reserve

Tymawr Convent grounds have been open before but are a popular site. There is an apple orchard and hay meadow with a wonderful diversity of flowers, as well as seats where you can sit and enjoy the spectacle. Flowers include Spotted, Pyramidal and Twayblade Orchids, Red Clover, Birds-foot Trefoil and Ox-eye Daisies and many more.

Ty Mawr Convent can be found from the Monmouth to Trellech road where it is signposted from the junction towards the Whitebrook valley but take the left fork. Continue along the lane for ½ mile and the convent is signposted on the right. Alternatively from Penallt, go back towards the Trellech to Monmouth road but take the first turn from the village crossroads to the left. Where this minor road is joined by another road, continue for a few yards and bear right. The Convent is about ½ mile along on the left. Park in the Convent grounds.

The meadows surround the house with small areas in front and behind kept as lawns. The grassland is very species-rich which becomes more evident when within the grassland itself. Wildflowers to be seen include one of the largest populations in Monmouthshire of the gorgeous Greater Butterfly-orchid. (Other species to be seen include Common Spotted-orchid, Lousewort, Tormentil and the Common Vetch.)  These meadows are open thanks to the tenant Nikki Godfrey, who will provide teas.

From the centre of Trellech follow the signpost to the Narth. After the turning to Beacon Hill there is a second right turn signposted to Maryland. Turn right here and continue along this lane for 250 metres. The meadows (called Four Acres) are on the left hand side with a driveway with drystone walls on either side.

This small triangular meadow at the end of Barabara and Terence Newby’s garden is very rich in plants. These include Twayblades and Spotted-orchids and the local Meadow Saffron.

Go uphill from Monmouth on the Trellech road B4239 around the bends. Bear left 2 to 3 miles from Monmouth at Lydart where signed to Penallt. Park on the left after 200 m and the small field is on your right between the Penallt and Trellech roads. Take care with traffic when crossing the road. If coming from Trellech turn right about 200m past the phone box near the Mitchel Troy turn to the left. Beware as this right turn is rather difficult and it is best to pull into the layby on the left to negotiate. 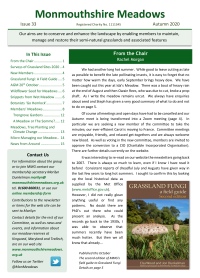 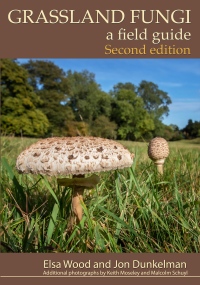